Posted on November 13, 2012 by sandyswimadmin

Delighted to say we had a great turnout on Sat in Sandycove with 14 swimmers:

And we were joined by 2 ladies from Co. Clare who were in Kinsale for a wedding.

Sunshine played a huge factor and even had the younger generation dipping their toes in!!

Due to popular demand another Turkey swim was held on Sunday in Sandycove with 8 swimmers:

We also had a Turkey Series swim on Loch Hyne on Sunday also with the following 8 swimmers:

and followed up with loads of home baked goodies, tea, coffee, hot chocolate. 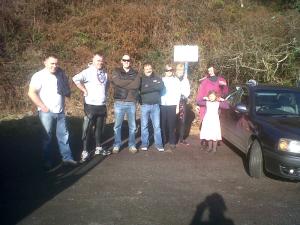 Thats a total of 3 Turkey swims in 1 weekend – never happened before!!
Well done everyone!

Next Sandycove Turkey swim is the 13.30 Sunday, 25th November (Lisa is coordinator)

Next Loch Hyne Turkey swim is this coming Saturday, the 17th November @ 11 am – (Steven Black will coordinate)
Following the Sat Loch Hyne swim, it has been suggested to head to the Sibin for a hot fire and tea!

This entry was posted in Sandycove Swim Club. Bookmark the permalink.